Let’s take some time away from our normal schedules to talk about one of my favorite (and least appreciated) rides at Disneyland: 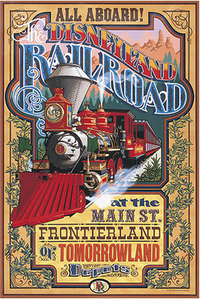 Since a young age, Walt Disney was fascinated with trains and this fascination seeped into his dreams for an amusement park. Disneyland features 5 vintage, steam-powered trains that make a 20-minute loop around the park carrying thousands of guests a day.

If you have ever gone to Disneyland, you have no doubt seen this train, or heard its whistle, as it travels along throughout the park, but have you ridden it? If you haven’t, I suggest you do! If you can’t (because Disney’s prices are crazy) take some time with me as I take you through the journey.

Let us board the train at Main Street Station.

Main Street Station, located only a couple yards away from the main gates of Disneyland, is perhaps the most iconic of the train stations because of its vintage feel with large steps that lead to the station and its red brick walls. On an average day, you will wait 5 – 10 minutes to board one of the five trains circling the track. There are two different types of trains: one in which all the seats face forward and one in which all the seats face outward. Your ride is bound to be magical regardless of which train you choose.

FUN FACT! See that sign that says “Population 650,000,000”? That is the total number of guests that Disneyland has had since its opening! They update that after another 50million guests have entered the park so the next sign will one day read “Population 700,000,000”

Boarding the train, you should expect to enter a tunnel in between every station. Some of these tunnels are only a few seconds long while others are more (but none are more than three minutes).

Do you hear that music in the hear? Smell the delicious food from one of the numerous cafes? You’ve reached New Orleans Square, home to Pirates of the Caribbean, Haunted Mansion, Splash Mountain, and Tom Sawyer’s Island.

FUN FACT! Now before you wonder if something is wrong, please be aware that that noise is INTENTIONAL! Actually, it is the Morse code version of Walt Disney’s Opening Address.

Hear that? And we’re off!

In between New Orleans Square and Toontown, guests are treated to a spectacular view of the Rivers of America. Here they will experience grand scenery that includes water falls, rivers, Native American chiefs, and beautiful views of the park.

Breathe in the fresh air away from the crowds and snap your last shots of Thunder Mountain quickly because here comes the tunnel!

FUN FACT! In this tunnel, you will actually pass through Splash Mountain and you can gaze down at all the guests who have just been soaked!

Home of the wacky, wondrous whimsical friends of Mickey Mouse, we have arrived in Toontown!

If you were to depart now, you would be only steps away from either the entrance to Toontown or from the classic It’s a Small World, but don’t depart just yet! We have one more stop to make!

One we depart from Toontown station, we travel behind the facade of “It’s a Small World” and make our way into the longest tunnel of the entire trip. However, this tunnel is more than it seems. Within the tunnel, guests view dioramas of the Grand Canyon and the Primeval World (dinosaurs included). When the Disney Railroad was closed in 2016-2017 for Star Wars land, Disneyland also updated this portion of the ride. These dioramas which had begun to feel old and obsolete were given new life with better special effects.

Unfortunately, due to the speed of our travel and the poor lighting, you are unlikely to capture a picture that really captures these dioramas. They are something you simply must see for yourself! 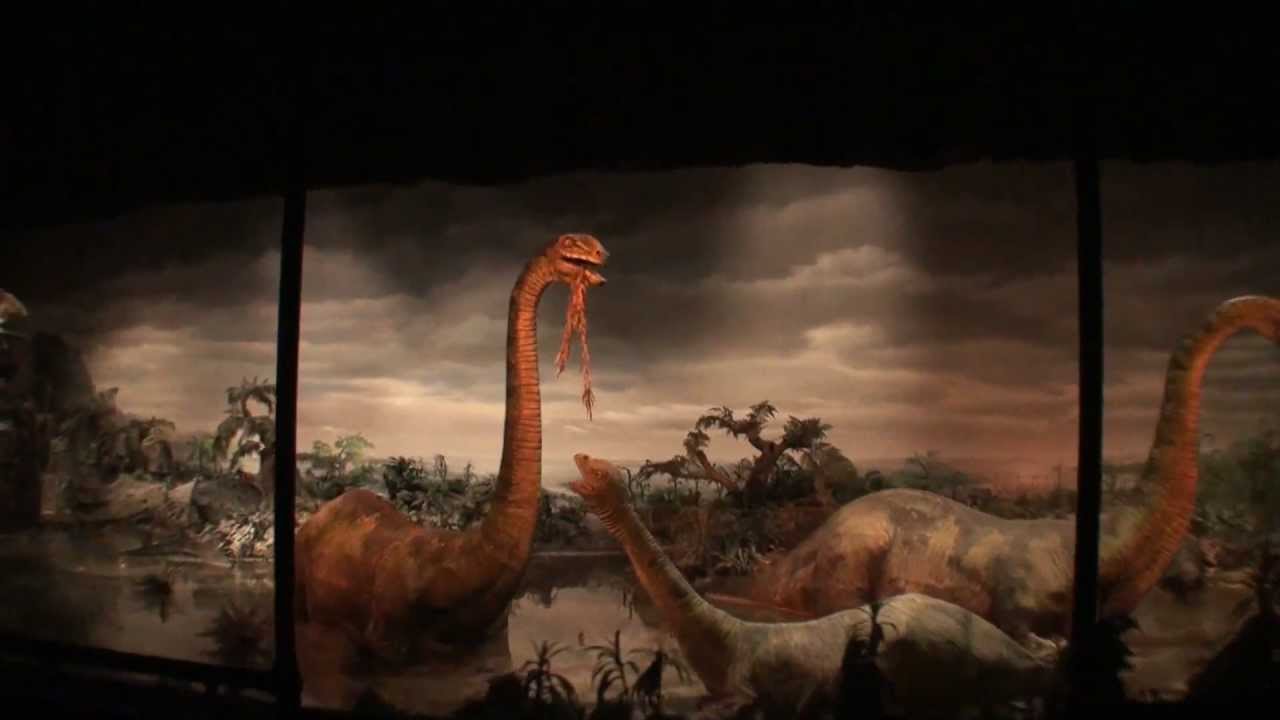 Disclaimer: If you have small children who are afraid of the dark, tunnels, loud noises, or dinosaurs, you might be better off departing at Toontown Station.

Pulling in right behind Autopia, we have made it to the fourth and final station of the Disneyland Railroad. In Tomorrowland you can travel to a galaxy far, far away and possibly run into some Storm Troopers! If that sounds like your cup of tea, go on and depart. Or, if you are like me and want to see the whole thing through, stay onboard as we make our way back to Main Street Station.

The distance between Tomorrowland and Main Street Station is not long at all, so it’s not a bad idea to begin collecting your belongings as you pass through the last tunnel. Throughout the train ride be sure to keep your eyes open for hidden creatures and friendly cast members!

As we arrive at the station, your feet and back rested and re-energized, be sure to thank your conductor as your depart! We’ll see you next time on the Disneyland Railroad!

First, thank you to everyone who responded to my previous blog about Disneyland and sent in questions or things for me to discover. Here’s what I found!

RUTH (RUBY) asked me to check for the Disneyland post boxes and here’s what I found:

There are indeed post boxes in Disneyland! And yes, they do “work.” As long as your letter is properly addressed and stamped, your mail will be sent out from Disneyland, so cool! I think you can even ask City Hall for a stamp if you forget!

-EUGENIA was especially curious about decorations and let me tell you, they were everywhere!

As soon as you walk up to the park you are greeted with snowflakes, holy, mistletoes, nutcrackers, and so much more! My favorite decorations were the trees and the Castle itself.

This is the tree over on the Disneyland side of the parks. It was so tall I couldn’t capture it in one frame. In fact, it is 60 feet tall! (To read more about Disneyland’s tree, click here). I took a closer picture so that you could see the magnificent decorations! Let me tell you, those bulbs were huge.

(This is me walking around Disneyland)

My good blogging friend CLAIRE YANG asked me if there were really hidden Mickeys and if I had found any. Well Claire, I found a few (there’s actually a book you can buy that tells you where all of them are), but here is my favorite! On The Haunted Mansion Ride, in the banquet hall, there will always be a hidden mickey among the plates. In the picture below the Hidden Mickey is right in front of the Ginger Bread house. Can you see it?

Claire was also curious about souvenirs. Well first, let me say I always prefer the hats to the headbands. The headbands are made for small heads and will most likely give you instant headaches whereas the hats are larger and can be just as cute! They do have some wonderful Christmas-themed souvenirs and treats like those shown below.

Of all the decorations, I love the castle, especially at night (I’m sorry I have no picture for the night, but it is all lit up and beautiful!). By the way, did you know that California’s Disney’s castle is specifically Sleeping Beauty’s castle?

On the left-hand side is Disneyland’s tree and on the right hand side is California Adventure’s tree. Which do you like best?

Well, I hope you enjoyed my Christmas trip to Disneyland! It really is a wonderful place and I hope to return soon!

Did you know that Walt Disney originally created a studio called Laugh-O-Gram? You’ve probably never heard of it because it went bankrupt.

Did you know that Walt Disney never profited from his work on “Oswald the Luck Rabbit” because Universal Pictures owned all the rights?

Did you know that Walt failed several times before becoming successful?

“All the adversity I’ve had in my life, all my troubles and obstacles, have strengthened me… You may not realize it when it happens, but a kick in the teeth may be the best thing in the world for you.” – Walt Disney

Everyone expected Snow White and the Seven Dwarves to be an enormous failure, except for Disney himself.

There is not a person today who has not at least heard the word “disney”. Billions of people watch these movies, cartoons, go to theme parks, read books all inspired by a man who began his career as a failure.

Undoubtedly there were times when Disney doubted himself, when he became discouraged. If he had allowed himself to remain discouraged, we never would have been able to enjoy the magic that he has created.

In my last writing tip, I encouraged you to put aside your discouragement. Failure does not end your career, it is just another obstacle to be overcome.

Keep your eye on my blog. In honor of Disney’s great triumphs I will be posting a Disneyland blog in a day or so about some of the best (and possible secret) experiences at Disneyland parks.