This review contains major spoilers for the movie Passengers which came out in 2016.

I highly suggest you watch the commercial first:

The Set-Up & the Turn

The film’s main protagonist are Jim Preston (Christ Pratt) and Aurora Lane (Jennifer Lawrence). The film opens with the starship Avalon transporting 5,000 hibernating passengers and 258 crew members across space toward Homestead II. Only 30 years into the 120 year journey, the starship encounters an asteroid field which damages part of its electronic systems, inadvertently causing Jim’s hibernation pod to malfunction. Jim awakes to find that he is entirely alone. Now this is where the film diverts from what the audience expects from the commercial.

In the commercial, we repeatedly see both Jim and Aurora awake, struggling to come to terms with what had happened to them. In fact, the trailer seems almost light-hearted at moments before it turns into fireballs and empty space. The turn in the commercial is echoed in the sharp turns in the movie. We do not even meet Aurora until about 40 minutes into the movie and she is still asleep in her pod. Before we meet her we get to see some really amazing acting on Chris Pratt’s part.

That’s right: depression and suicidal thoughts. Jim Preston is awake for a year and eight week all alone for the first 40 minutes of the movie. He struggles to put himself back to sleep, to wake the crew, or to access the ships controls (all to no avail). His only companion is Arthur, a robotic bartender who has some sage advice at times and then quotes cliches. Jim tries to keep himself occupied but we slowly witness as he descends into depression and madness. During this time, he comes across Aurora still sleeping in her pod (sleeping beauty anyone?). He readers her file, learning that she is writer.

(Of course at this point I automatically fell in love with her character as well from one writer to another. One of her best quotes comes from a recorded video she made before boarding the Avalon in which she states, “I think we tell each other stories to know we’re not alone”)
Jim falls madly in love with Aurora and debates on waking her to end his own suffering. 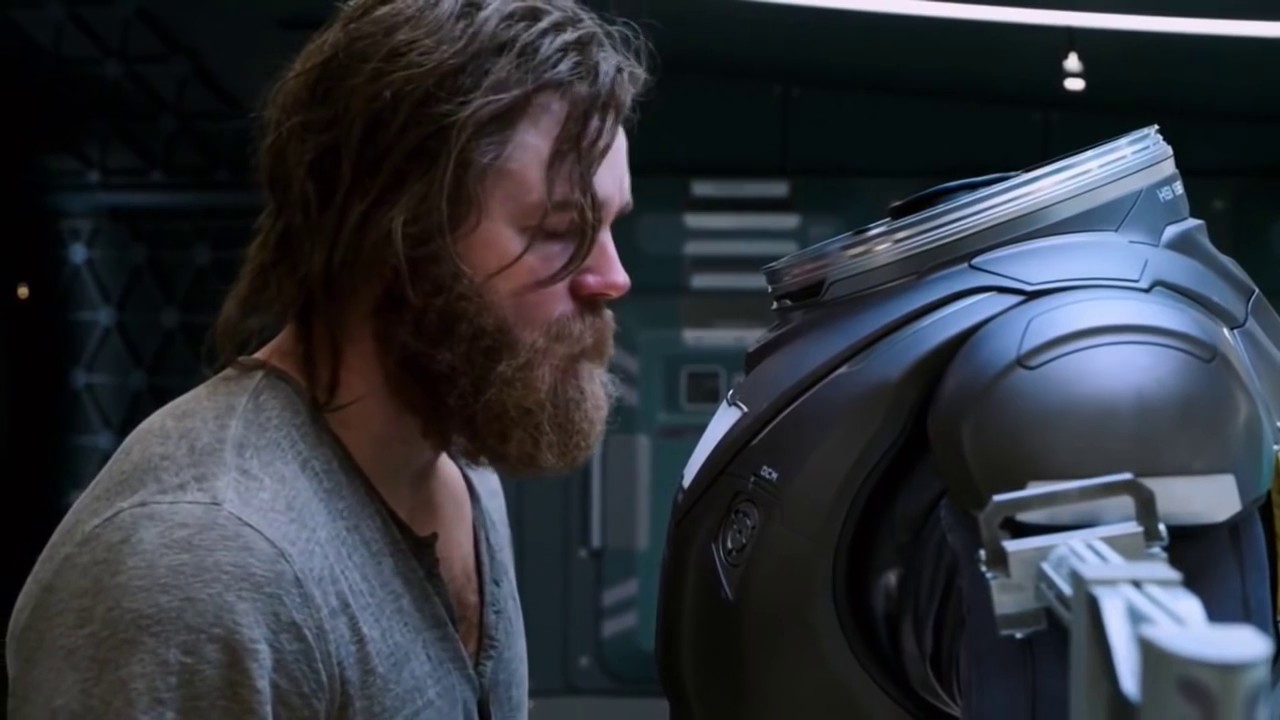 Having decided that he will not wake up Aurora, Jim considers suicide. The above photo shows Jim considering to open the air lock with no space suit to protect him. His finger on the button, he considers ending it all, driven to insanity by his isolation and depression. Of course, if he had we would have no movie so he doesn’t and chooses to wake Aurora instead.

One of the best things, and most surprisingly things, this movie does is its depiction of morality. Even knowing it is wrong, knowing that he will be killing her, Jim wakes Aurora, desperate for human contact and smitten by her stories. When she awakes, Jim allows Aurora to think that her pod malfunctioned like his. She too struggles to come to terms with her situation, although she is helped along by Jim in adjusting.

Meanwhile, we the audience, are infuriated by Jim’s actions and yet also sympathetic to his suffering. We cannot help but to route for their romantic relationship, while at the same time, knowing that it cannot last and that Jim must pay for his actions. The two continue to grow closer together until Jim decides to propose. However, with such a huge secret between them, we the audience know that something is going to go wrong and it will go wrong soon.

And indeed, once Aurora learns the truth there is an intense scene where she physically beats Jim with her fists, stomps on his face with her foot, and nearly kills him with an axe.

There are some seriously dark moments within this film as Jim, Aurora, and the audience struggle with the moral implications and consequences of Jim’s actions. As Aurora says, “It’s murder!” He stole away her life by forcing her to live it out on the ship with only him. Just as these moral issues are climaxing, the movie takes another turn.

Chief Deck Officer Gus awakes as his pod too malfunctions. However, his pod’s malfunction is more severe as it causes Gus’s organs to fail and he quickly dies. His character was mainly introduced so that Jim and Aurora could later use his ID card which gives them access to previously restricted areas.

Jim and Aurora learn that one meteor was able to pierce the ship and cause malfunctions in the fusion reactor. Forced to work together to save not only themselves but the other 5,000+ people onboard, Jim and Aurora attempt to patch the hull. Due to a fire building up, Jim must go outside the ship in a spacesuit and manually open the doors (to let the fire escape) while Aurora pulls a switch from the inside. Realizing that Jim must stay outside holding the doors, Aurora forgives Jim, asking him to find another way. However, there is no other way.

Aurora pulls the switch and Jim manually holds open the doors (while attempting to cover himself a heat-shield). Although the tactic is successful in saving the ship, the fireball proves too much, throwing Jim out of the hull and into space, snapping his tether. Aurora quickly goes out to save Jim. By the time she has brought him back in and dragged him to the hospital wing, the autodoc (an electronic doctor/machine) tells Aurora that Jim is dead. Unwilling to accept this, Aurora forces the machine to perform multiple procedures that revive Jim. Reunited, Aurora forgives Jim for waking her and the two seem reconciled.

Jim further investigates the autodoc, realizing that it can be used as a hibernation pod. However, there is only one: meaning that while Aurora can be put back to sleep, Jim will be alone. We are transported 90 years into the future as the crew awakes. They walk onto the main deck to discover their world of steel has been transformed into one of nature. There is a house and Aurora (through voice over) tells of her choice to remain with Jim and to live our their lives together. (He even built her a house!) 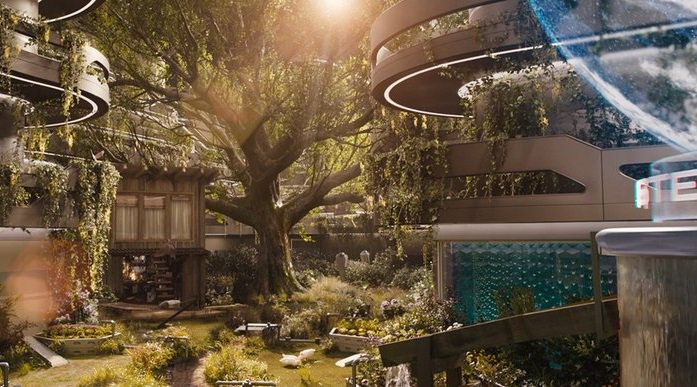 So a ton of people were unhappy with this ending. How could she forgive him? Would she really have made that choice? Was there another way? Even the director himself addressed these objections, stating that this was the only realistic ending. After going through so much together, Aurora would never have been able to leave Jim without hating herself later on. What do you think?? Be sure to comment below!!

There is a lot of interesting things being done in this movie with technology vs. nature (as can be seen in the picture above). The return to nature ultimately proves triumphant for our protagonists. What did you notice about these themes of morality, technology, and nature?